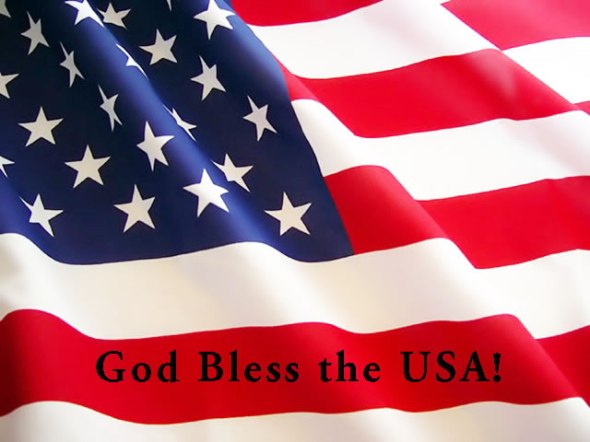 Earlier tonight, I sat on the couch with my daughter (who just turned 20) as we listened to the President tell us the big news that Osama bin Laden had been killed.  We had been watching another program when the news cut in to tell us the President was about to make an important statement to the country.  “What could it be?” we wondered.  What was so important that it had to be told so late this Sunday evening.  We heard nothing of any type of news impending in the last couple of days.  So what was so important that he had to address the whole nation?

I went to my son’s room to make sure he had his T.V. on and was watching.  He was.  I make it a point to make sure my children watch all important news programs and announcements about our government in an effort to help them understand, somewhat, politics so they will be prepared and educated voters when they are able to do so.  I try to tell them that voting is a privilege and not something they should take lightly or do if they can’t make an honest attempt to understand what they are voting for and who they are voting into any office.

They seem to have a great interest in what goes on in our country and how it is being run, so I feel I have done my job as a parent in that area.  And they are very concerned, as young folks should be, about the future of our country.  So, here we three sat in anticipation of this very important news.  We waited and waited as delay after delay came, until  finally, he went to the podium to make his announcement.  Osama bin Laden, the mastermind behind the September 11 attacks, had finally been killed.  His body was taken by the U.S. team that shot him.  After all this time, he had finally been found and killed.

We were stunned.  This whole thing had been going on for so long and now it had finally been done.  As the President spoke of the day of the attack on the Twin Towers, I thought of that day way back then as it had unfolded.  From those early morning hours when I learned of the first plane hitting the first tower, after I had dropped my children off at their grade school, till the end of the day when I didn’t know if it was even safe to lay my head down on my pillow and go to sleep that night, and everything that happened in between.

I thought of all those people who had died in those buildings and their families.  I thought of all the soldiers in every military service who has fought for our country and who had enrolled in the service as a result of that attack.  And I said a silent prayer of thanks for them while I continued to listen to the President speak.

Who knows what the next few days, weeks, and months will hold?  I feel proud, as an American, that we have some sort of victory after all this time.  I feel strong and brave to know we didn’t give up.  I feel relieved that there is one less crazy, violent, evil person on this planet who spews his ugly ideas onto weak humans in an effort to gain control over things he should have no control over.

And I feel glad to live in America and am proud of my country, once again.

I'm a creative person that likes to express myself in many different ways. Photography, painting, sewing, crocheting, writing, cooking, crafting, digital works, and whatever else I can figure out how to do. If you're creative, you know exactly what I'm talking about.

Also, please, don't steal my images. They are not for anyone else's use but mine. I worked to take them and if you want to use them, you need my permission. All I'm going to ask for is credit and that you don't crop out my name. Be nice. K? Thanks!